No one knows Friedrich Julius Stahl (1802 – 1861). He was a legal philosopher of Jewish parentage who converted to Christianity and became a conservative defender of Prussian Lutheran conservatism against the imposition of Enlightenment values. He rejected Hegel's argument that one could create polities based on principles generated by rational minds rather than principles sanctioned by "divine authorities". Stahl insisted that any politics that derived its principles from human reason in abstraction from the traditional rights and Christian beliefs of the German nation violated the natural distinctions between men and "God's ordering of the world".
This has been a standard argument of traditional conservatives since the "counter-Enlightenment" movement against the French Revolution of 1789. It is an argument that has suffered one defeat after another in the face of the relentless advance of science, and the rights of individuals to pursuit their own happiness. Traditionalist eulogies for the "divine sanctity of monarchical rule," the value of faith, and the inborn merits of the aristocracy, have been no match for the leftist celebration of "progress,"  "education over ignorance," "tolerance over intolerance," the "open society" over the "closed minded" world of conservatism.

Even as traditional conservatives came to accept the inescapable end of divine authority, the rise of the middle classes and the scientific character of modernization, they have been unable to withstand the radical liberal argument that no educated person should accept a politics that is unanswerable to the critical standards of reason.

It does not matter that Leftists would go on to accuse the Enlightenment of being a Eurocentric movement privileging Western reason over the intuitive and holistic ways of non-Europeans. The Left would forever remained identified with the "realization of reason" against every prevailing form of prejudice that "bred an irrational and enslaved order" -- to quote some words from Herbert Marcuse's Reason and Revolution (1941), a very influential book in the rise of cultural Marxism.

I was required to read some of Marcuse's books for a PhD course along with other publications by the Frankfurt School. There is even a website documenting the popularity of Marcuse's books in university courses. Check it out: "Courses using books by Herbert Marcuse".

Marcuse welcomed the destruction of "many theological and metaphysical illusions" accomplished by the natural sciences. But he also chastised social scientists for studying "social realities after the pattern of nature and under the aspect of objective necessity". Societies should not be viewed as naturally given realities but as human creations susceptible to improvements through the critical application of reason to the solution of social injustices. He felt that the goals of Enlightenment reason were being abandoned in the "positivistic" "acceptance of the "given" by social scientists unwilling to subject society to critical questioning.

The "force of the dialectic," Marcuse argued in Reason and Revolution, should not be "neutralized". The modern world was still "contradictory and irrational throughout" in its imperialistic behaviors, militarism and violence, racism and sexism. Therefore, if the world was to be made truly rational, the social sciences should not be allowed to remain "apologetic and justificatory" in the face of these irrational realities.

While old conservatives would try to adjust their traditionalism and their Christian idea of the State to the successful rise of the middle classes and the natural sciences, Marcuse would call for a "critical" or "negative" dialectic against the irrationalism still prevailing in modern Western societies. While conservatives would give lectures to a decreasing number of followers about the continued relevance of traditionalists such as Joseph de Maistre, Edmund Burke, and Russell Kirk, the critical philosophy of Marcuse and the New Left would become the official mission of universities across the West.
The mistake of traditional conservatism was to think of the Enlightenment as a mere ideology rather than as a movement deeply steeped in the unique predilection of Western peoples to justify their actions on the basis of their knowledge and rational capacities. Conservatives should have offered rational explanations about the importance of traditions, community ties, and the natural inequalities of men rather than rely on appeals to the "divine order of God" or the "authority of history and tradition". 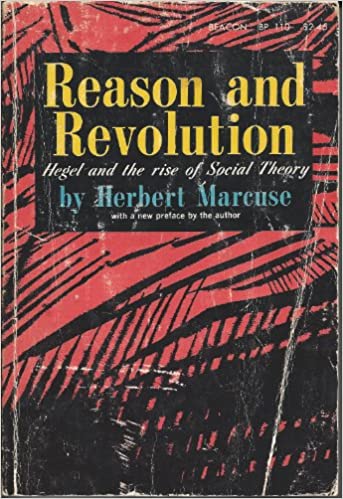 Marcuse had an easy time demolishing Stahl's repudiation of modern rationalism. Stahl could persuade the old nobility that a Christian social order cannot be answerable to reason since this order is already sanctioned by tradition and faith. But he could not persuade the dominating middle classes. Stahl could argue that he was offering a compromise between the old feudal past and the new middles classes in advocating for a constitutional monarchical system with representation limited by property and education, but he could hardly persuade future generations that tradition and custom are the source of right, not reason.
Stahl made much sense when he observed that "man is not an absolutely free being [but] a created and a limited one, hence dependent upon the power that gave him his existence." But it was easy for Marcuse to challenge Stahl's inference from this observation that "the authorities, therefore, hold  full power over him, even without  his consent".
It was not hard for Marcuse to counter that Stahl's philosophy of right amounted to "submission" to "unquestionable claims" by those in power. The Left would thus make itself the party of reason, whereas old conservatives would go on talking about "divine revelation or natural law," "faith in custom" and "orderly acceptance" of the "natural distinctions between classes".
The development of reason is the peculiar achievement of the West. The Dissident Right should not allow the Left to maintain its current political monopoly over reason. This is what makes evolutionary psychology an important field of study for our side. We don't need to appeal to religion, faith, divinity, and custom (on their own without rational justification) to defend our views. We have rationally based explanations about the inequalities of man, the genetic differences between the sexes and races, and the differences between whites and non-whites in ethnocentrism.
The Left, for some decades now, has been relying on unquestioned dogmas about equality, authoritarian PC mandates, irrational labels aimed at ostracizing critical thinkers and blocking any rational investigation of numerous subjects. We on the Dissident Right do not need to make appeals to dogmas. We have rationally based research showing that ethnic nationals benefit psychologically and economically from limited immigration and from a state that encourages its citizens to develop a sense of community cohesion rooted in ancestry, custom, and religion. We are the ones asking rational questions. We have research showing that ethnocentrism is a rational behavioral strategy, and that establishment social scientists recognize this fact, which is why they are advocating for "interethnic unions" to abolish ethnocentrism and create race-mixed nations in the West.
Of course, politics can't be reduced to rationally-based statements and debates. Politics is energized by passion, emotions, and will power. There are symbols like the flag or the invocation of a "Fatherland" that transcend the rational. It has been established by Carl Jung's school that, however rationalized we may have become, a segment of our minds will always remain structured by collective unconscious forces expressed through archetypes, which are innate and inherited, and can never be eliminated by education, but are actually indispensable parts of the libidinal creative energies of humans. Nevertheless, we should not forget that the reason we have been able to make the unconscious an item of thought, rather than allowing it to remain something mysterious and unfathomable in the depths of our minds, is that we have been the most rational race in history. The devious, corrupt, degenerate Left nurtured by Marcuse should not be allowed to claim reason for itself.
Posted at 10:03