Justin Trudeau Calls For Acceleration in Replacement of Whites

Justin Trudeau, an extremely banal person lacking all the standard qualities we have associated with leadership throughout human history, is nevertheless aptly aware that within the current political zeitgeist the leader who promotes diversity and gay pride the most will gain admiration no matter how mediocre.
The imbecilic act of sending politically correct messages with his sock choices brought him accolades from the establishment media as a new type of politician who is "redefining what it means to be a world leader".
It is from this perspective that we should look at Justin Trudeau's announcement three days ago that Canada will welcome over 1.2 million immigrants within the next three years, the highest level of immigration in Canada's history. This massive increase will start as soon as the new year arrives next month. Over 400,000 aggressive foreigners are set to be imported each year in 2021, 2022, and 2023.
We are supposed to believe that the aim is to "compensate for the fall of immigration" Canada experienced this year due to COVID-19. However, Justine has also indicated that even if Canada has to "shut its borders" to Canadian citizens due new "COVID-19 lockdowns" his government is determined to implement the "most ambitious immigration levels plan in Canada's history."

Justin is happy to inform us that thanks to the relentless attacks by LGBT sex peddlers against traditional families, Canada has "one of the world’s lowest birth rates at 1.47 births per woman" — offering his government an excuse and a great opportunity to implement the most important goal of his party: the replacement of "old stock Canadians".
In fact, "on the same day" that Canada announced it will flood the nation with 1.2 million immigrants, it extended "travel restrictions".
Lockdown or not, Nigeria, India, Pakistan, Zambia, China, Ghana and the Philippines have been identified as the "greatest source countries" for the "enrichment" of Canada.
It is all part of a readily available package of goodies all politicians in the West can take a grab at without much effort. Becoming the first leader of a nation to hang out in "gay bars" and attend gay pride parades every year are widely praised as "groundbreaking" by a new generation of activist clones. 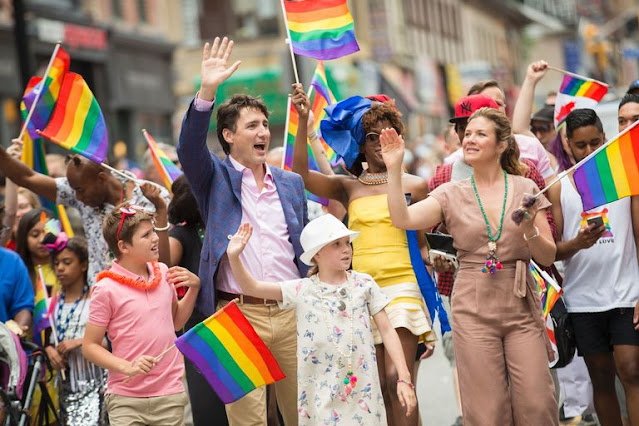 It is so easy for him. There has never been in history a leader exuding such ecstatic levels of joy as Justin in gay parades — in hundreds of images. How can a father ask his child son to wear a pink shirt and hold a rainbow flag with thousands of adult homosexuals hovering around in very sexually suggestive ways?
It looks like we are heading to a new style of leadership in which sticking one's tongue out (as if ready to take it all in) stands as a meritorious quality. "Love is love," Justine answered when someone asked him if a marriage between two transsexuals was equal to a marriage between a man and woman for the purpose of creating a family. 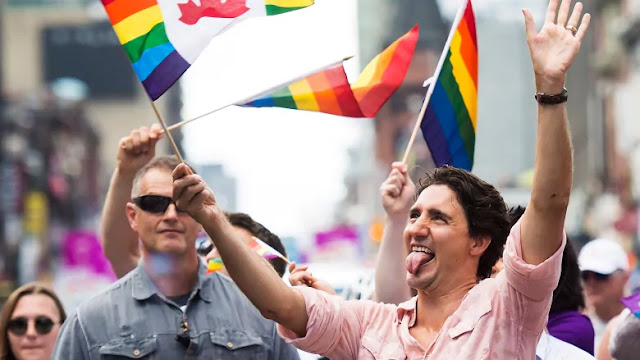 But being for "gay marriage", Justine says, is not enough to achieve greatness. One must also celebrate brown immigrants with the utmost affection as superior to Canadians who were born in Canada. In 2017 Justine actually told immigrants that he is "jealous" of them because they made a "deliberate choice" to make Canada their nation in contrast to white Canadians who are citizens "by default". He told foreigners who are thinking of coming to Canada that this is "your country more than it is for others"  — for whites who created Canada under extremely harsh conditions without any handouts.
Justine says that one of the most pleasurable things about being a prime minister is welcoming brown men into his administration. He admits he gets a weird urge to stare in their eyes and kiss them every time he greets them. 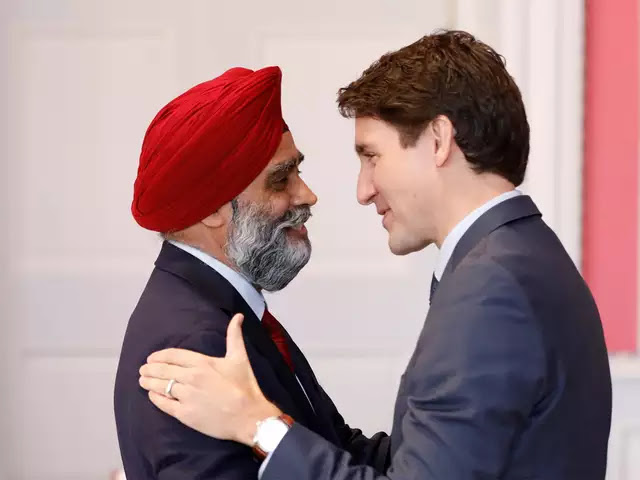 Looking into the eyes of Sikhs in a state of longing has been redefined by the media as a "collaborative, thoughtful and respectful" type of leadership. 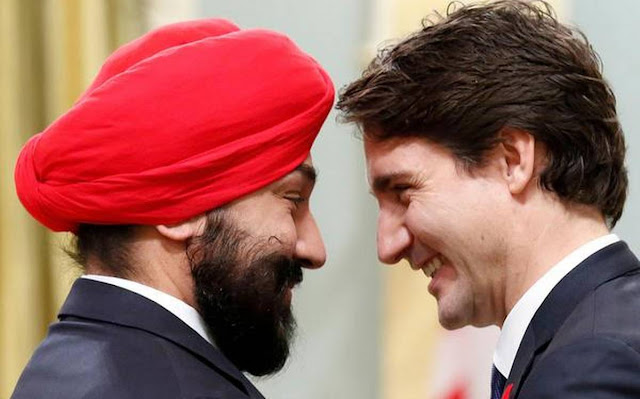 Another major contribution to leadership by PM Justin has been walking around with his wife and children in foreign outfits: "Justin Trudeau NEVER misses an opportunity to don traditional attire" — Hindu, Aboriginal, Islamic, Filipino garbs. 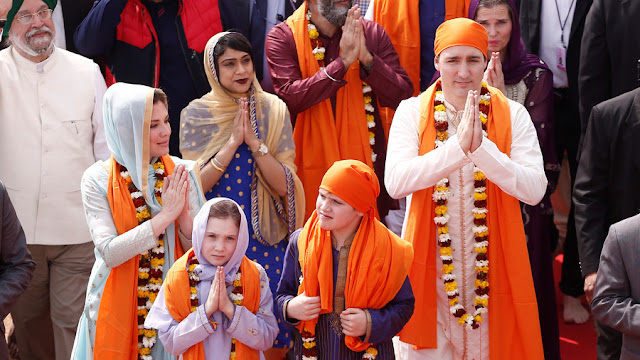 He hopes that Canadians come to appreciate that his acceleration of the replacement of whites in Canada has nothing to do with "genocidal" tendencies and everything to do with his compassionate love for "humanity". Will future historians in a totally diversified Canada packed with sexually confused mongrels conclude that crying was one of Justin's greatest contributions to a new style of leadership?
This crying, in combination with the singing abilities of his wife Sophie, some say, will seal the deal as far as Justin's greatness is concerned. Watch this video of his wife breaking out in song in commemoration of Africans, a song she wrote for her daughter so she learns to love blacks. It is the highest cringe level witnessed in history.
There you have it, CEC readers. This is the couple in charge of the replacement of whites in Canada.
Posted at 10:23