Where The PPC Is Wrong 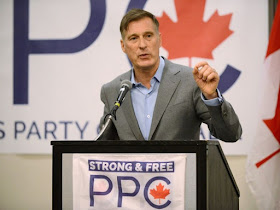 The peoples party of Canada has a new thesis of what Canada was and should be. Maxime Bernier recently released a new ad on his twitter page. The ad tears into the Multiculturalism Act but it also does something else, it tries to explain a Canadian Identity.


Official multiculturalism is based on the idea that there is no unified Canadian society and no distinct Canadian identity to integrate into, and that we are just a collection of ethnic and religious tribes living side by side.

In this article I am going to try and explain why this new thesis is inaccurate and why this lie does more harm than good.

First, Maxime Bernier’s idea of a nation is limited to “a sense of belonging and common values”. He ignores language, history, and ethnicity. Already he has shot himself in the foot. If Canada was just based off a sense of belonging and common values than why did the English and the French have to fight a war for the land? How will Maxime Bernier explain the distinct Quebecois identity that has been trying to tear away from Canada almost from inception? In these things Maxime’s belief makes it impossible to objectively understand Canada’s history.

Next Maxime states that Canada has “always been a diverse country”. He doesn’t say much around this statement but in many ways this is simply untrue. At the start we could say the country was greater than 90% European, not only that but it was rooted in being British, it was a British colony. We can say there was a significant French Catholic population that was different to the majority British Protestants but how can we compare that to what we have today?

Finally, Maxime Berniers states his view of what Canada’s distinct values are:
So what is the problem with this picture of Canadian values? Well as Maxime said, they can be true about every single other western country on the planet. So these are not distinct in any way, but can we even call these Canadian values? This country didn’t have a constitution upholding all these freedoms for 2/3rds of is existence. Separation of church and state is somewhat ridiculous as well, especially in Quebec where the catholic churches had an extremely large amount of political power in the province.

When you look at Maxime Bernier’s list of “distinct Canadian values” can we say any of those are not also true for the most part of our neighbour to the south? And that brings me to the final and most important point. Maxime Bernier, if he would succeed in spreading his idea of what a Canadian is, would make us indistinguishable to the United States.

This is why the PPC is wrong, and dangerous. They would further the process of us forgetting our history and the people who shaped it all for the sake of individualism and “freedoms”. And to that I say: