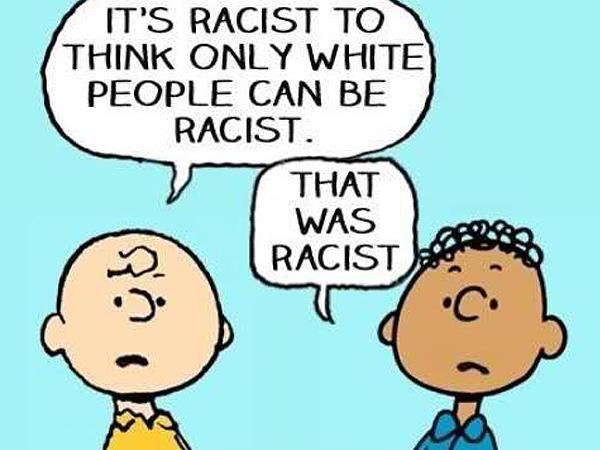 In our society being a racist is unacceptable.

Now, this statement may be scoffed at by those who think we're deeply embedded to the systems of white supremacy and that white cis-normative heterosexist capitalist patriarchs are complicit in the destruction and annihilation of black and brown bodies.  But how else is one to explain the swiftness with which the accused get cast to the flames?

Up until rather recently, the meaning of 'racism' was a term with a familiar definition: 'prejudice, discrimination, or antagonism directed against someone of a different race based on the belief that one's own race is superior'. This concept of 'racism' used to be differentiated from the concept of "race". The concept of 'race' states that the larger human species can be divided into a number of racial groups that are sufficiently distinct from one another.

This concept of race concept typically involves several criteria along the following lines: Races reflect (i) some type of biological foundation which generates discrete groupings wherein members of distinct racial groups share a set of biological characteristics. This biological foundation is (ii) inherited from generation to generation, and (iii) it generates phenotypic expressions such as skin colour, hair, eye shape, among other morphological traits. The characteristics generated by this biological foundation are (iv) identifiable by observers such that an individual can be identified with a particular racial grouping; and (v) this racial grouping has a genealogy that can be traced to a race's geographical origin (Africa, Asia, Europe, or the Americas).

'Race', then, is a concept that describes and divides humans into racial groups (such as above).  Racism, however, is the belief that one's race is superior while others are inferior in some way or other, and a racist is a person who believes that their race is superior to others and discriminates against members of other races based on that concept.

So, what's the problem? This seems simple enough. Well, nowadays, this definition of racism has been exploded by myriad academic disciplines to encompass an array of loosely connected phenomena. No longer is racism the discrimination committed against someone of a different race based on the belief that one's own race is superior, now 'racism' is an outgrowth of the functioning of social structures and one's position in them. This I'll call 'new racism'.

'New racism' spins the traditional definition of racism on its head. In it, 'racism' is thus defined as something like: 'the routine generation of norms and practices that confer material and/or cultural advantages on a dominant racial group whilst producing adverse outcomes for the mariginalised racial group(s)'. So, no longer is racism the prejudice, discrimination, or antagonism directed against someone of a different race based on the belief that one's own race is superior, but rather racism now refers to a person who is designated to belong to a group that has been deemed to belong to a system that is based on 'systemic racism' — belief need not be a part of it, and one need not willfully participate in any act of discrimination against any other race.

From this perspective, members of ethnic/racial minorities may be prejudiced against members of the dominant culture, as well as towards members of other races, but since they "lack" the political and economic power to actively oppress them, they cannot be said to be practicing 'racism'. (This fits right in with the current zeitgeist's obsession with 'punching up' vs. 'punching down'.)

This hardly seems fair and accurate since there are numerous examples of white people being victims of racist attacks — most infamous being the Chicago kidnapping and torture affair. There are also examples of inter-minority racism, and there is the phenomenon wherein minorities create intense racist attitudes and behaviours towards their oppressors in order to cope with their "disadvantaged" position. So, in short, although whites and non-whites alike may be said to have racial prejudices, and both may be actively discriminating against members of other races based on these prejudices, it is the dominant position in society that is held by whites that automatically makes their prejudices racist. 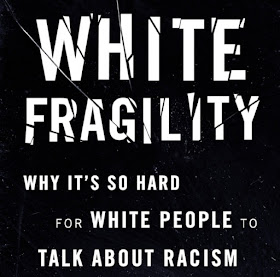 In fact, this story of the kidnapping of a white kid was spun by some right-wing pundits as being related to Black Lives Matter (BLM) — the social justice activist movement for reform and/or abolition of law enforcement and incarceration of blacks — and by doing so, they enabled BLM activists and their representatives in the media to pivot away from the black people engaging in a clearly racist act, with articles arguing that black people, as a group, were the real victims of a handicapped white guy getting tortured by four black people. Total trash.

That aside, from what I can tell this 'new racism' can be applied to the behaviour of nation states and their criminal justice systems. It can be used to describe 'unconscious bias': gentrification is racist, and white flight, also. White people speaking for people of colour, as well as being silent may also be seen as racist, after all, 'white silence is violence', or so the placards tell us. Refusing loans via red lining is racist and giving out too many loans via sub-prime lending is also racist. Denying one’s 'whiteness', or having any pride in it, is also racist. Even denying that one is a racist is, in fact, racist. These can all be construed as racist, but the one thing it cannot be applied to is any action made by a non-white person.

Now, one could say that this is a rather parochial understanding of what's being said by the advocates of new racism, after all, there are numerous countries that have no white people and exhibit their own forms of racial discrimination. White people are not needed for there to be racism. Surely there is truth to this, but this new racism is almost never used in these contexts. New racism is mobilised almost exclusively to describe interactions between white people and non-white people: from genocide to colonialism to hiring practices to under-representation in some sport to unconscious bias. It's racism all the way down.

Another problem is assignment: how does one become racist? If racism is 'prejudice plus power', then how much power is needed to make prejudices become racist? If we all have racial prejudices, but only some of us have the power required to transmogrify our prejudices into racism, then wouldn't the acquisition of more and more power by people of colour make them more and more likely to become racist? By adding 'power' to the 'prejudice plus power' equation, one would be making racists. But perhaps this is nothing to worry about, since such people wouldn’t be racists. They certainly wouldn’t think of themselves as racists, and any benefit they confer to their group wouldn’t be done at the expense of others. Such a thing certainly wouldn't happen intentionally... Ah, but forgive the sarcasm, and digression.

Additionally, is racism a choice? As stated previously, prejudice and power are individually necessary and jointly sufficient elements of racism, but power, as it is being spoken of in this context, isn't a matter of individual choice. White people don't choose to be born white; to be born into a system that apparently privileges them. To be charitable to the new racist thinkers: being born into privilege (power) is something that just happens. But this hardly makes any sense. A white guy, in Appalachia, who is suffering from a meth addiction is hardly in a position of power or privilege, and yet that person could very well be racist. Perhaps one could interrogate his drug supply and find that it is linked to the war on drugs or something.

To my mind, the racist-making property is vague at best, and strikes me as fairly occult. This new racism concept relies on the all-too-academic theory of "intersectionality". This theory of oppression states that individuals exist in a social matrix wherein vectors of oppression and privilege intersect within individuals who contain numerous identities which, themselves, are products of and/or beneficiaries of those oppressive systems — in short, the theory that states that different identities intersect, and that if you are white, then it follows that you are racist because having a white identity intersects with having power over blacks.  This new racism operates in a realm of magic wherein thinking something tightly corresponds with consequences in the world.

Finally, I will close with what I think is so dishonest about 'new racism': it's that the definition of racism has been switched from a more individualistic and intentional model to an institutional and abstract model without adequately shifting the connotation of 'racism'.

It is a manipulation to use a term like 'racism' or 'white supremacy' which is charged with visceral images of lynchings, eugenics, the Holocaust, the genocide of the indigenous North American tribes, cross burning, swastikas, police brutality, and all sorts of other sordid events when, in fact, one is talking about the supposed 'unconscious bias', 'microaggressions' or 'intersectional' position of white persons.

This, however, is what is being banked on by the users of the term: they're piggybacking on that long chain of racist acts and this allows them to colour the perception of the term. They're smuggling in the weight of past racism alongside the clarity of historical knowledge to make their claims have impact, and control conversation and behaviour.

So, it is not that people are more racist now than in previous years, but rather activists and progressive thinkers are weaponising the language of racism in order to effectively label opponents as 'racists' merely because they are white who "benefit" from living, say, in a majority white nation. In short, racism has been re-defined in a power-play by black feminists, critical race theorists, and other 'progressive' thinkers and disciplines to subordinate legitimate voices from the dominant culture to their language and ideology.

As stated at the outset: being a racist is unacceptable in our society. So, what better way to turn opponents into pariahs than to scapegoat them automatically as racists simply because they belong to an 'oppressive system of white supremacy'?
Posted at 10:20