The Solutreans And The First No-Nations 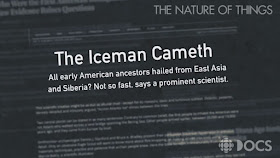 CBC And The Solutrean Hypothesis


This past winter the CBC attracted criticism for airing on The Nature of Things, "Ice Bridge," a documentary that argued that the first humans to colonize North America and Canada were Europeans. The Solutrean Hypothesis, as it is called, apparently, has become a "favourite piece of propaganda among White supremacists." Detractors and critics were outraged and claimed that it was "extremely irresponsible" that the National Broadcaster would support a theory that proves the first humans to the New World came across the ocean from Europe and not via a land bridge from Asia. It would only be irresponsible, of course, if it challenges your intention to displace Euro-Canadians of their ancestral homeland by filling it with third world immigrants who have very little in common with us and without the consent of the founding cultures. It seems, God forbid, that Europeans "colonized" North America before "Native" Americans.

According to the theory, an ancient European race of highly sophisticated Ice Age humans, the Solutreans from southern France and Spain, migrated across the Atlantic on massive ice-flows, in pursuit of the Auk, a giant penguin-like bird that provided protein and oil for cooking, light and heat. The Solutreans had mastered a process to make very fine, durable and sharp blades of stone that they used in hunting. A very significant technological innovation at the time. Two American researchers, Bruce Bradley and Dennis Stanford are "spearheading" the research. According to Stanford, an anthropologist from the Smithsonian Institution, "these people were here and they were here in great numbers."[i]

Not only were they here, transiting the Atlantic from ice flow to ice flow, in giant outrigger canoes, but it appears that they went back and forth. The progressives and cultural Marxists are frantic over the genetic analysis of teeth from ancient remains of the Huron-Wendat people, right here in Ontario between Lake Simcoe and Georgian Bay, that show a marker associated with Europeans. Further evidence, according to "First Nations," Louis Lesage, of his people’s oral tradition confirming that his ancestors came across a "great salt lake" from the east.[ii] It’s our land after all.

This is made all the more important in light of the recent Facebook post on July 2nd, quoting the American Declaration of Independence and banned as "hate speech." The Declaration explicitly demonizes the indigenous peoples of the United States:


...the inhabitants of our frontiers, the merciless Indian Savages, whose known rule of warfare, is an undistinguished destruction of all ages, sexes and conditions.

Facebook apologized, of course, and blamed their algorithm, or what some might call "legions of hate robots," for the terrible mistake. At the current pace of demographic change, the Declaration of Independence will, before long, be widely accepted as hate speech. The Bible won’t be far behind. The Declaration was an announcement to the world of the founding of a new nation, based on Western values. It was a White republic with virtually nothing in common with the emerging third-world dystopian hell-hole being created by mass immigration today. And by the way, the great White men who signed that Declaration, were not, contrary to the views of Kamala Harris, U.S. Senator from California and part of the Mulatto Mafia, "colonizing, genocidal, raping, land stealing invaders."

To make matters worse, if that is even possible, Victoria B.C. Mayor Lisa Helps has decided to remove a statue of Sir John A. Macdonald, Canada’s first Prime Minister, from the steps of City Hall as part of the city’s reconciliation process with "First Nations," citing Macdonald as a key architect of the Indian residential school system. Helps mentioned a speech delivered in The House of Commons by Sir John A, in 1883, where he referred to "First Nations" people as "savages." That sounds familiar. To rub salt in our wounds, Victoria will replace the magnificent statue of Macdonald with a plaque that "details the city’s path of reconciliation with the Lekwungen peoples, the Songhees and Esquilmalt Nations."[iii] Helps says a cleansing, blessing and healing ceremony will be held in the space where our great statue formerly stood. I would prefer to cleanse Helps right out of office.

Apologizing to the First Nations has become a prerequisite for holding public office in Canada, culminating in the nationwide penitence tour now known as the "Truth and Reconciliation Commission." Since 1998, over $5 billion has been offered in compensation in various class action settlements. That’s billion with a B and what do we have to show for it?

Non-Whites, native tribes, MSM, Antifa and our very own "elites" are targeting our statues and symbols. The underlying sentiment is clear: Europeans should never have come to this continent. Once White, Euro-Canadian history is replaced, monuments and "plaques" to a new anti-White, anti-Euro-Canadian history will be erected to honour the new people who consolidate political, cultural and economic power in Canada. They want Euro-Canadians too scared to speak up until it’s too late to do anything about it. Where is our will and why are Victorians not protesting on the steps of City Hall? We must stand and fight. If you attract fire, you must be over the target. 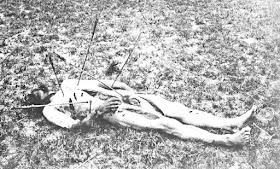 To be sure, there is no question that the Indian bands across North America were savages. Of all archeological sites excavated around the world, the one that shows the highest rate of violent death was among Pueblo Indian ruins in Colorado around 1250 AD. Close to 90% of human remains there showed violent trauma to the head or arms. Victims had been starved, scalped, mutilated, and dismembered. Even leftist Harvard psychologist Steven Pinker is of the view that,


Contra leftist anthropologists who celebrate the noble savage, ...pre-state societies were far more violent than our own. [iv]

During the American-Indian Wars, if you were a paleface and captured you were in for a world of hurt. Common torture techniques included burning, which was done one hot coal at a time; cutting with knives, beatings with switches or sticks, and jabs from sharp sticks. Prisoners’ fingernails were ripped out. Their fingers were broken, then twisted and yanked by children. Captives were made to eat pieces of their own flesh, and were scalped alive...the execution of a captive, especially an adult male, would take several days and nights in order to prolong their agony. [v] 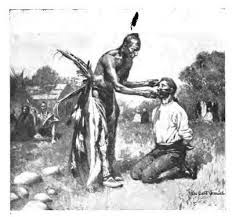 However, it was the Comanche Indians who wrote the book on savagery. These guys were truly merciless and some of their methods are remarkably similar to the Islamic State’s YouTube uploads:
It’s also worth noting that during the U.S. Civil War, a secondary war broke out with the Dakota Sioux Indians in Minnesota in 1862. Vengeance and retaliation were clearly primary motivators in Sioux culture.[vii] White women and children were brutally murdered all the while the U.S. government, already under tremendous financial strain from the war, continued to make annuity payments to the Dakota through the entire period in both Gold and "greenbacks." This was a foreshadowing of Islamic immigrants building bombs and IED with state issued cell phones in their section 8 housing. 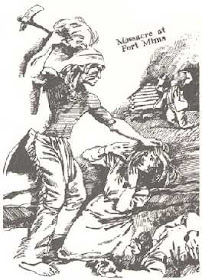 Ultimately, separation not annuities or food stamps worked to end the Dakota threat.[viii]


But let's be clear. Whether the first colonizers in North America were Solutreans (most probably) from Spain and France, 20,000 years ago OR across the land bridge from the Bering Straits, 14,500 years ago, most native tribes were nomadic. They did not occupy Canada or the continent in a conventional sense. There were precious few permanent structures. There were no iron implements and no wheel. Natives mainly lived in tents or igloos. They were themselves "immigrants."

There was no civilization in North America. What the Europeans found in what is now Canada, or the United States for that matter, was not, in any other sense, competitive with that of Western Europe. Europe had Shakespeare, Descartes, Galileo, Michelangelo and Leonardo, agriculture, written languages, metallurgy and knitted fabrics and materials all of which were absent in North America when Columbus showed up.

It is also a lie that Europeans invaded an Indigenous "nation" or group of nations. The country was very sparsely populated and no native group or authority purported to govern anything larger than small itinerant bands, or to have borders or any concept of national space and jurisdiction. The claim of cultural genocide, or the concept of physical extermination, as in the labour camps of Eastern Europe from 1941-1944, is flat out fraudulent. Native bands and tribes were First No-Nations.


All that being said, Canada needs a genocide narrative as a founding legend in order to promote the dispossession of European Canadians. Natives, I would argue, have become useful idiots for the progressive, open borders/mass immigration lobby. Open immigration will not help Natives, Inuit or Metis and, in fact, native communities will be negatively impacted more than the majority population. "New" Canadians have no sense of obligation to native communities.

Nevertheless, the continued narrative of aboriginal victimhood enables the left to present the acceptance of multiculturalism as an act of atonement. We are required to open our borders as part of our sacred obligations as a Nation. A whole reparations industry has emerged in the past decades to provide financial restitution to the victims of federally-operated boarding schools for aboriginal children. Canadian "First No-Nations" people are more valuable to the left as abstractions than as individuals or a people. Feminists point to the Iroquois as an example of a functioning matriarchy; environmentalists, as a model of harmony with nature; and Marxists as an egalitarian utopia. These idealized visions seek to confuse us and disguise the truth. It’s all fraudulent.

The bands were not beacons of fraternity and equality. There were aristocracies and hierarchical social structures and some Pacific Coast tribes bound infants’ heads to develop elongated skulls and thereby set them apart from lower orders. In addition, there were head hunters and warfare was often for resources, territory and worse still, by the 19th Century, 15% of the population of the Pacific North West were slaves, mainly women and children (Jones, 2017). The tribes of the North West also liked to collect the body parts of their defeated foes as trophies, including heads and hands. It was a merciless, brutal and violent existence where lifespans rarely exceeded 35 years.

"Playing the Indian Card" refers to the reflexive habit of pro-"immigrationists" to remind us that "we are all immigrants — except our native peoples." It is intended to shut us up and smother dissent. Since our forefathers came as 'invaders,' we have no moral authority to oppose our own displacement. It tears away our moral authority to control our own borders. The end game is clear and it is simply to de-legitimize Europeans as founding peoples. But why are European settlers' displacement of natives perceived differently than their displacement of each other?

Indigenous groups suffer with significant problems including violence, spousal abuse, child abuse, missing women, alcoholism, drug addiction, diabetes, unemployment and suicide. We need to help them. We could start by providing their communities with safe, reliable drinking water. Before we let another single illegal or legal immigrant, for that matter, cross our border, let’s solve our problems at home. I would even consider an indigenous homeland; a new "Abronord."

Nevertheless, please remember, the next time someone challenges you, charging that Canada is not "your" homeland and that only native Canadians have a legitimate claim, thank them for playing the Indian card. The Solutreans were European. It is our homeland. Regardless, those itinerant bands we found in North America were savage and primitive by even our own standards at the time. When Europeans arrived in North America there existed No-Nations. Let’s give credit where credit is due, however. Many stood and fought, which is more than I can say for the paleface, today.