Cultural Marxism = Everything That Is Wrong With The West 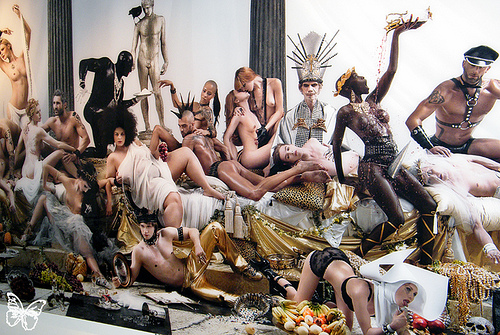 The moral and intellectual fabric of Western society has been disintegrating for some time. To a large extent the destruction can be blamed on a form of Marxism, socialism, left-wing thinking, "underdog" mentality, which has encouraged the nanny state, with people living in perpetual imbecility and irresponsibility. In the middle of the last century, Marxism never had much luck in intellectual contests among Westerners, so it had to burrow underground, eroding the foundations of modern society and leaving people in a state of perpetual self-doubt and abnegation. This is what is called "cultural Marxism." Not much of the reality of cultural Marxism is clearly evident: most of it is experienced as a mere premonition, like that of a coming change in the weather, and its existence can easily be denied.

Cultural Marxism began in the early twentieth century, when Marxism in the usual sense (i.e. economic Marxism) was a failure in Western Europe; in the First World War, for example, most people were far more interested in defending their country than in overthrowing their government. Cultural Marxism arose because, in order to win in the West, Marxists realized they would have to go underground, working on the "culture" rather than openly advocating revolution. The movement began roughly with Georg Lukács and Antonio Gramsci, who claimed that in order for Marxism to succeed in the West, it was vital to destroy the existing culture by sowing the seeds of doubt regarding all traditional Western moral values.

Hence the formation of the Institute for Social Research at the Goethe University Frankfurt, and its offspring, some of whom (at various times) were Herbert Marcuse, Theodor Adorno, Leo Lowenthal, Max Horkheimer, Walter Benjamin, and Erich Fromm. Following Hitler's rise to power in 1933, the Institute left Germany, finally moving to New York City, where it was affiliated with Columbia University.

In The Origins of Political Correctness, William S. Lind breaks cultural Marxism down into four parts:


Where does all this stuff that you've heard about...the victim feminism, the gay rights movement, the invented statistics, the rewritten history, the lies, the demands, all the rest of it — where does it come from? For the first time in our history, Americans have to be fearful of what they say...

We call it "Political Correctness"...

First of all, both are totalitarian ideologies. The totalitarian nature of Political Correctness is revealed nowhere more clearly than on college campuses...

Indeed, all ideologies are totalitarian because the essence of an ideology...is to take some philosophy and say...certain things must be true...That is why ideology invariably creates a totalitarian state.

Second, the cultural Marxism of Political Correctness, like economic Marxism, has a single factor explanation of history. Cultural Marxism...says that all history is determined by...which groups...have power over which other groups...

Third, certain groups...are a priori good, and other groups...are evil...regardless of what any of them do...

The attack — by Westerners — on Western beliefs and values never slows down. The "Hippie Revolution," damaging the lives of so many Baby Boomers, was largely due to the machinations of Benjamin Spock, Noam Chomsky, and Timothy Leary. The Church has reduced itself to infantilism. Ph.D.'s are handed out to students who can only be described as illiterate. Electronic devices destroy our attention span, reduce direct contact among humans, and turn everything into "virtual reality."

Sorry — maybe some of this can't be laid at the feet of poor Karl Marx. Perhaps some of this is just a matter of "lifestyle choice," to use modern jargon. But is there really a difference?

A related problem that makes cultural Marxism so hard to analyze is that to some extent it's a group of overlapping activities, not just one, and that's especially true nowadays. Multiculturalism, sexual deviancy, mass immigration, "sanctuary cities," aggressive religions, dumbing down, "liberalism" that is not at all liberal, and so on — the modern world has become somewhat shapeless and formless. The trail of Marxism is so long, and goes cold so often.

At times the trail becomes quite ludicrous, with "multiculturalism" as an example of that absurdity. The early cultural Marxists hoped to destroy traditional Western culture by flooding it with other cultures. Yet nowadays the photographs in advertising largely portray non-White (non-European, non-Western) people, in spite of the fact that the US and Canada are demographically still mostly White — Canada is still about 70-75 percent White, even if this is not true for Vancouver, Toronto, Montreal, or some other large cities. Yet every posh bank in Canada advertises its services very largely with photographs of happy non-White or multi-racial couples.

But the inclusion of non-Whites is good for business, since such people compose a new and possibly lucrative customer base — "diversity is our strength" is the new chant. So what began in the 1930s as a Marxist tactic has become, many decades later, a marketing ploy by capitalist bankers who would rather die than be regarded as Marxists!

But what does the term "left wing" itself really mean? In France long ago, the terms "left" and "right" had precise meanings, based on where one was actually sitting in the Estates General, indicating one's attitude toward the Revolution. Now perhaps "left wing" means big government, and big spending by that government, but above all it means supporting the "poor" rather than the "rich." By the "poor" I mean the voters, of course, not the people leading such flocks.

As soon as "guilt" has become established as "fact," every relevant piece of paper that appears in public must emphasize "multiculturalism" at all costs. Although the terms are used misleadingly, everything must also stress "fairness," "democracy," and "equal rights." The punishment for breaches of "multiculturalism" is swift and merciless, unless one is attacking Christians; Easter seems always ready to disappear from the free calendars handed out by politicians.

There are corollaries to all the above. Leftists must believe in prohibiting the ownership of guns, for example. If people believe they are underdogs, they must also believe they have no right to defend themselves. Only grown-ups should have guns, and leftists know they are not grown-ups.

Most leftists believe all cultures are, in some inexplicable way, equal. In their naivety, they cannot believe that many cultures are cruel and intolerant, locked in the pre-literate mentality of a thousand years ago. Westerners today cannot understand that there can be such vast differences between the mentality of one culture and another. The mainstream news-media foster this misunderstanding by failing to report the shocking statistics of rape, mutilation, murder, and other barbarisms that go on in this world.

Most people have little sense of history, yet cruelty has long been a part of that history. Beginning about 5,000 years ago in the Near East, various civilizations arose in Egypt, Babylon, Assyria, Persia, and so on. After a war between city-states, it was customary for all the male inhabitants of the losing city to be put to death, and impalement was one of the most common forms of killing. That ancient mentality has not entirely passed away. Yet Westerners like to fool themselves into believing that the entire world consists of people who read glossy magazines and keep up with all the intellectual trends. The reality is that, even in modern times, the counterpart to an act of "tolerance" in one country would just as surely result in a death sentence in another.

Cultural Marxism is also an effective means of rationalizing the quest for "the ethnic vote." The cultural-Marxist dogma plays into an alleged economic need: to increase immigration and thereby sustain a "growing economy." Yet massive immigration really has little or no benefit to the country, and in fact leads to overcrowding, unemployment, and other social ills. For the rich, on the other hand, massive immigration means more buyers, more workers, and more investors. For politicians, more people means more votes. For religious groups, larger numbers of the "faithful" means a greater chance of pushing out competitors. Yet none of these groups has the overall good of the country in mind.

In short, cultural Marxism refers to everything wrong and deviously sick about the West today.
Posted at 12:00