Canada Day Is Now A Day To Inflict White Guilt 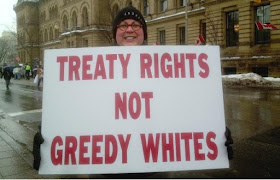 July 1st of this year marked the 150th anniversary of the Canadian confederation as everyone is well aware at this point. The public and private spheres both put a great deal of time promoting this special occasion although quite frankly I felt rather underwhelmed by it all. It should have been something to instill great feelings of patriotism and celebration, but given all that has happened to Canada in the last 50 years, not to mention the current 'we are the world' style multicult propaganda being pushed, I must say I was not feeling like celebrating. Evidently I was not the only one, but others had far different reasons.

Ever since Idle No More and the largely positive coverage of that movement by the press, the Amerindian lobby has grown considerably. In the weeks and months leading up to Dominion Day there was a rise in open protesting of Canada Day by Amerindians who see it as a day of oppression as opposed to celebration. They never have and never will identify with the Canadian project because it was not one they were ever part of.

On July 1st itself there were a number of protests throughout the country, including Toronto and Regina. It would seem that in the aftermath of Idle No More a number of smaller groups have arisen, although how significant they truly are is rather suspect at this point. To what extent are they being hyped up by the media? Canada's so-called policy of reconciliation has emboldened Amerindian groups to call for reclaiming whole cities and even Parliament Hill as their 'unceded territory.' Of course many of the people involved in these movements, protests et al., are at best only of partial Amerindian descent. Many Whites can be seen identifying with these ultimately anti-White groups thanks to years of indoctrination in public education, universities and the media.

Despite only being 4% of the population (and that includes Metis), 'aboriginal' interests have been successfully pushed in recent years with the most obvious example being the decision by the Trudeau government to accept in full the TRC narrative on the residential schools. As Lynn Beyek found out recently, to point out that these were not genocidal camps and that many prospered because of their time in such institutions, is not something you can do publicly. We are not only to believe they were a holocaust but that intergenerational suffering is the reason for the violence Amerindians inflict upon each other. And it doesn't just stop at residential schools or land issues, to in anyway critique or make light of the Amerindian lobby is a huge moral crime in today's Canada, even leftist Jews like Johnathan Kay are not exempt from attacks for failing to tow the line.

Given how corrupt and violent Amerindian communities are it won't be long until residential schools 2.0 spring up out of necessity. No one seems willing to just let them live by themselves because they know that would just lead to self-destruction and sadly we feel like we owe them.

Every Occidental country now needs a genocide narrative as a founding myth in order to promote the dispossession of Whites and neoliberal globalism. For Canada residential schools fit nicely, well once you tweak history a little bit. The Amerindians have now like the new left been coopted by these forces, which are more than willing to accept and promote their social concerns so long as their ultimate economic goals are achieved. Amerindians, then, are complete tools. Hatred for Whites is so strong that they are willing to openly and vociferously promote greater immigration because they are more concerned with attacking Euro-Canadians than protecting their own people. Open immigration will not and does not help Amerindians, Inuit or Metis. In fact, they may be negatively impacted by it even more than the majority population.

Of course, in reality the true history of the colonization of Canada is one of British liberalism. The British could have promoted the annihilation of Amerindians or of their being bred out of existence, as occurred elsewhere, but instead they promoted a policy of treaty signing, of trying to find a way of accommodating these people and moreover, of trying to uplift them. The residential school system was hardly perfect but its purpose was to prepare Amerindian children for a changing world and also to protect them from their own families who were mistreating them. Something which still goes on to this day, as does the mistreatment of Amerindian women by their own menfolk. Unlike in other parts of the Americas there were no Indian wars in Canada; the only conflict that comes close is the Metis revolts but these were a series of skirmishes. Though I suspect the policy in Canada would have been much the same even if there had been wars, given the liberal policy shown towards the Maori of New Zealand who did fight long, protracted conflicts with the British.

As this recent story illustrates, Amerindians show again how much they really don't care about indigenous-hood and are really just tools of the liberal elite. Anything to stick it to the White man. Euro-Canadians have greater claim to being indigenous than recent arrivals from Syria. Funny how it's ok for Syrians and other non-Whites to come and maintain their cultures on 'native land' but ours are condemned. And certainly Whites are indigenous to Europe (not only have they always been there but they formed the modern states that exist there so there can be no claims of terra nullius), but Amerindian lobby doesn't come out against the replacement of Germans, Swedes and other Europeans in their native homes.

Many second and third generation immigrants from India and elsewhere have also bought into the anti-White narrative and many seemingly promote Amerindian interests. But, I wonder, how committed these people truly are to the Amerindians? Might be fun to see what happens if and when Canada becomes 'majority minority' and conflicts arise between Asiatic groups and the Amerindians, because I believe ultimately, the Chinese, Punjabis, et al. will put themselves first. Amerindians need Euro-Canadians because of their stupid White guilt complex.

Not all Euro-Canadians, however, are willing to sit back and accept the new manufactured narratives about Amerindians. Recently, in Halifax a small group peacefully counter protested an Amerindian one held in front of a statue of Edward Cornwallis, who is attacked for having called for reprisals against Mikmaq. (They leave out, of course, that Mikmaq were slaughtering Whites and his actions were a response to their cruelty.) If these incidences, as peaceful, calm and rather mundane as they are, continue then we could see end of feeling of White goodwill to Amerindians. They are working hard to indoctrinate the young as Amerindian lobby and anti-White groups more generally admit. Note how they falsely state race is simply about color and refuse to ask deeper questions as to why Amerindians may not be as successful as Whites and indeed Asians. If White privilege is real, then the question we should all ask is why is it a bad thing for Whites to be successful? Especially as it only seems to be in White countries.

Many are obviously in favour of Canada day but for how much longer? Will the current 'we are the world' style narrative give way to the 'evil genocide' one? More likely, the two will exist in tandem as the plan is not so much to be consistent but to use any and all narratives so long as they erode any sense of pride and identity in Euro-Canadians for themselves or their ancestors.
Posted at 08:25