Acadians and the Minimal Role of Immigrants Before the Conquest/1763


It has been established at CEC that the current portrayal of Canada as a nation populated from the beginning by peoples from diverse cultures and racial backgrounds should be seen as nothing more than an act of deception orchestrated by academics in wilful disregard of the historical evidence for the sake of legitimizing the leftist/global corporate goal of creating a race-mixed Canada against its European heritage.

The record shows, rather, that ninety percent of all immigrants who came to Canada before 1961 were from Britain, that it was only after the institutionalization of official multiculturalism in 1971 that immigrants from the Third World started to arrive in large numbers, that Canada was 96 percent ethnically European as late as 1971, and that immigration itself was not even the most important factor in Canada's population history but the high fertility rates of true born Canadian pioneers.

It has also been established at CEC that the French Canadiens were practically a new people born in the soil of New France, or within lands inside present-day Quebec, driven by the "exceptionally high" fertility rates of women, 5.6 surviving children on average, coupled with honourable patriarchal respect for women with children, the hard work and self-reliance of farmers.

In this article we will show that before the conquest, from Canada's origins up until the 1760s, immigrants played a very small role demographically in the making of Canada. Not only the Quebecois, but the Acadians as well, were a newly created people in the soil of North America. Native born Quebecois and Acadians were the main historical protagonists in the settlement of Canada for almost the first two hundred years.


Don't you believe current historians who tell you that "New France was a multicultural society, with a considerable First Nations population and an African community". This is the message advocated by one of the most widely used texts in Canadian universities, consisting of two volumes, Origins: Canadian History to Confederation, and Destinies: Canadian History since Confederation, by R. Douglas Francis, Richard Jones, and Donald B. Smith. This very successful text, now in its seventh edition, claims that it is a major improvement over "the older texts", not only in incorporating "new historical research", but in showing that "anyone seeking to understand our diversity today must first examine the pre-Confederation era" (Origins, pp. 108, viii, fourth edition).

The two volumes seek to imprint upon students an image of Canada as "diverse" and "multicultural" from the beginning. Needless to say, Amerindians were the first inhabitants of territories that came to be identified as "Canada" only through the establishment of French and Anglo institutions during the 1600s to 1800s. But the "first peoples", the Hurons, Algonquins, Cree, Iroquois, and others, were organized in tribes spread over territories that can in no way be identified as part of "Canada" before Europeans arrived. They were territories actually contiguous with the United States rather than neatly located within Canada. Only in retrospect, through the European science of geography, have they been, and can be, demarcated in the continent of North America for pedagogical instruction, but not as actually existing tribal nations with definite geographical boundaries, since none of these tribes were organized as nations with marked boundaries. 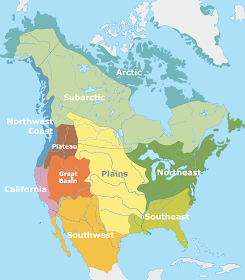 European geographers, not the Amerindians, have classified the natives of Canada in terms of six cultural areas, "Northwest Coast", "Plateau", "Plains", "Subarctic", "Arctic", and "Northeast". Indians had an intimate knowledge of the land, the soil, migration pathways of animals, weather, location of rivers, lakes, mountains, upon which the first European settlers and fur traders relied for survival. It was the Europeans, however, who mapped these territories and eventually created our modern institutions from the ground up.

It is extremely anachronistic and misleading to tell students that these tribal groups were members of a multicultural Canada. The French and English, for one, inhabited separate cultural lives, and in respect to the Natives, they inhabited totally different worlds. Their interactions with Natives are best described as interactions between separate peoples, commercial and military interactions, which affected both sides, but which essentially involved the modernizing encroachment of the Anglo-French side upon the Native cultures, leading to a situation in which, by the time of Confederation in 1867, only 1 percent of the racial population of Canada was Amerindian.

This reduction was of course tragic for the Aboriginals. But it is only by identifying them as a separate people that we can acknowledge their distinctive heritage instead of falsely assimilating them into a "multicultural Canada" as co-creators of a nation that only became multicultural in 1971 and in which, to this day, most Natives remain apart.

It is outlandish for Origins and Destinies to tell students that "in 1867" the Natives peoples were one of the three "major groups" that made up "Canada's multicultural society" (Destinies, third edition, p. 1). How can one percent of the population living in "lands reserved for Indians" — to use the official designation of the British North America Act — be identified as a "major" cultural group in Canada, equal to the French and the British, which made up 92 percent of the population?

The historians of these volumes want to have it both ways: an image of a European Canada that "decimated" the Natives through diseases, and an image of "First Nations" as co-partners in the creation of Canada's parliamentary institutions, legal system, schools and universities, churches, and modern economy. They want students to believe that the Natives were the "first peoples", followed by the French and English, as the next two "major groups", followed by the arrival of "non-British and non-French immigrants", as a fourth major group. This fourth group is portrayed as a multiracial lot, even though the statistics contradict any such picture.

The facts about the ethnic composition of immigrants, which this text cannot hide altogether, show that, at the time of Confederation, the English constituted about 60 percent of the population, the French 32 percent, and the remaining "non-British and non-French immigrants" about 8 percent. The non-British and non-French were all whites from Europe and the United States. 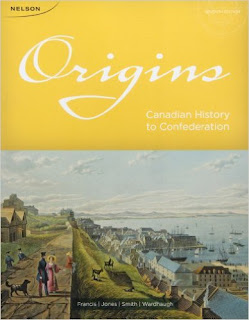 There was no "considerable" African community in New France. The facts stated in Origins, which are the only facts that can be legitimately used, contradict this contrived interpretation: from its origins to 1759, only about 1,200 African slaves were brought to New France (p. 111). Another source says that "from 1681 to 1818 there were approximately 4100 slaves in French Canada, representing less than one per cent of the population".

The facts Origins has to rely on, since they are the only historically documented facts, contradict not only its claim that Canada was created by diverse racial groups but also the claim that the Europeans generally were "immigrants". In the case of New France (and let us not forget that the history of New France is basically the history of Canada up until 1763), the text offers a detailed table on the number of French immigrants "by decade" from 1608 to 1759, from which we learn that the total number of immigrants throughout this period was only 8,527 (p. 93). By contrast, the population of New France in 1759 was about 60,000. These numbers are consistent with the numbers I offered in The Canadiens of New France: A People Created Through the Fecundity of the Women — Not Immigration.

Since the French were the first Canadians, and the English proportion in Canada as a whole, before the Conquest of 1763, was scattered and incidental, it behooves us to conclude, on the basis of the above numbers, that immigrants played a minimal role from the time Samuel de Champlain planted the first permanent settlement at Quebec in 1608 up until 1763. 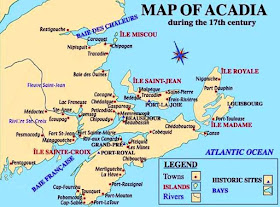 This point can be further accentuated through a consideration of the Acadians. In the calculation of the demographic history of French Canadians, the Acadians are sometimes included without a clear identification of their own demographic identity. The Acadians were another newly created people in the soil of America, not in present day Quebec, but in the maritime part of New France, or in the province of present day Nova Scotia.

The beginnings of the Acadians closely resembles that of the Quebecois; they too began as a small colony of men, or wooden buildings constructed in Port Royal in 1605 by Champlain, but these colonists were forced to return to France in 1607. In 1611, 20 new colonists, including a family, were brought back to Acadie, but this settlement failed as well.

It was only in 1651 that a demographic dynamic was set in Acadie, when about 50 families, or about 500 settlers, were brought in. After 1671, 40 more families were recruited from France, leading to a population of 800+ by 1686. By 1710, there were around 2,000 Acadians, "most of them born in North America" (J.M. Bumsted, 2003, p. 39). The text Origins likewise informs us that the "average Acadian couple usually married in their early twenties and had ten or eleven children, most of whom survived to adulthood" (p. 140).

The British gained control of Acadia in 1713, and in 1749 some 2500 British Americans were recruited, and then in 1750-51 about 1500 German Protestants settled at Lunenburg. This population, however, has not been counted in the above Francophone numbers. We will be writing about British immigration/birth rate patterns in a future article.

In the context of a full-scale war between France and Britain, and the refusal of the Acadians to give a formal pledge of loyalty to the British rulers in Acadia, in 1755-58 the British deported about three-quarters of the Acadian population. By 1762, they had expelled another 3000. However, in 1764, the British allowed about 3000 Acadians to resettle back in Nova Scotia, and by 1800 the Acadians numbered 4000.

The conclusion we must reach is quite self-evidential: the Acadians began as a small group of immigrant families, only to grow into a people with blood ties firmly set in Acadia, through a very high fertility rate, with its own unique Francophone identity, with speech patterns quite different from the Quebecois, in a very harsh environment that required the harvesting of salt from the salt marshes, the clearing of forested uplands, the building of dikes to reclaim land from the Bay of Fundy's strong tides; yet establishing themselves with a "far higher standard of living than all but the most privileged French peasants", coupled with a spirit of independence and refusal to submit to external authorities, which led to their expulsion, though not their demise, constituting today about 11,000+ in Nova Scotia, and 25,000 in New Brunswick.

The claim that Acadians were just immigrants no less different to the making of Canada than Sri Lankan Tamils, corrupt Chinese real estate millionaires, and Somalis is patently absurd, a discreditable claim that only academics who are out of touch with historical reality, and shamelessly unburdened by their traitorous attitudes towards their ancestors, would make.